Showcasing Teesport as the northern gateway for trade

We’re delighted to launch an all new identity and digital platform for Teesport; aimed at promoting the unique strength of the River Tees, its industries and businesses.

Holding the position of Statutory Harbour Authority for the River Tees, PD Ports own and operate Teesport, the UK’s fifth largest maritime complex. Handling 28 million tonnes of cargo and contributing £1.4 billion to the UK economy every year, the North East port boasts industry-leading infrastructure and unparalleled connectivity to key global markets. As well as supporting over 22,000 jobs in the supply chain, this makes it critical to the Government’s levelling up agenda for the North.

Aligned with the recent publication of Future Vision — setting out their bold ambitions to position the Tees Valley as the UK’s number one port region by 2050 — the new innovative platform aims to promote the strengths of the River Tees and support businesses that rely on the river to trade.

It's part of PD Ports’ continued commitment to work with customers and key stakeholders to maximise investment and job opportunities across the region. As the lifeblood of the Tees Valley, the River Tees provides businesses throughout the North and across the UK with essential access to international markets. Alongside a refreshed identity, the vital tool is aimed at both river users and potential stakeholders alike, with shipping reports, tide times and business directories sitting beside a wealth of information about the river’s world-class operations.

The first task involved updating and refining Teesport’s existing identity, which while being steeped in history and gravitas was lacking clarity and simplicity for digital use. Yet despite the importance of a digital-first identity, any wordmark or logo still needed to be identifiable to passing traffic and port users. Another consideration was its alignment and interaction with the PD Ports brand and their role as Statutory Harbour Authority. While it was crucial that the identity reflected the organisation’s role and close relationship to river activity, it also had to be bold and recognisable enough to proudly stand on its own.

To help establish this link, we used the main Futura font for the wordmark. We also utilised the colour palette to further strengthen the ties between the organisation and the port. But rather than using the main purple and navy palette, we explored a more vibrant, light blue tone for the crest itself.

Elements from the previous identity were retained and recarved such as a pair of lion rampants, flowing waves and a heraldic shield, which helped bridge the gap between the previous identity and its modern, stronger, bolder and clearer iteration. New elements were introduced too, including an outline of the iconic Transporter Bridge which added balance to the crest and a sense of local identity for the port’s businesses and people.

An immersive platform for an international port

As the identity developed, we began work on the new immersive online platform that serves to not only promote the port’s assets but also the businesses that exist on the River Tees. With an overarching aim to position the port as the UK’s northern gateway for global trade, emphasis was placed on showcasing its national and international competitiveness as well as its role in driving future investment, job creation and climate commitments.

A custom-built interactive map was created, featuring pins and filters that highlight key information and businesses. Including manufacturing and process facilities, support services and video, the intuitive and engaging map plays an important role in showcasing the scale, geographical location and features of the Teesport site.

Our Digital Director, Adam Gatenby, said: “The new digital platform strengthens Teesport’s online presence and truly reflects its size, scale and importance to not just the region but the wider UK.

“Consideration had to be given to a diverse range of users, stretching from businesses and investors to job searchers and the general public.

"Making sure that each of these can find the information they need quickly, clearly and intuitively was key, as was expressing the port’s world-class facilities and infrastructure.”

Another crucial aspect is the business directory, which shows the area as a gateway for international trade, business and activity. It also handily helps users search and filter businesses based on service or sector.

As well as being able to view as a complete directory or on the interactive map, each business has its own individual profile page where they can manage and populate content relating to business overview, latest news, job vacancies, useful links and key contacts.

The directory is part of wider collaborative working that’s been crucial to the design and build process of the platform. From the very start, PD Ports have regularly engaged with key businesses, offering updates on the project as well as inviting stakeholders to demonstrate their knowledge and expertise via the business directory.

“The River Tees is the lifeblood of the Tees Valley and a leading gateway for international trade, providing 24/7 access to global markets and linking the region to key industrial connections around the world.

“The new website will showcase the unique strengths of our region to inward investors, demonstrate the world-class infrastructure and unparalleled connectivity we have at Teesport as well as promote job and training opportunities in order to drive social value in the Tees Valley.

“We have seen that a collaborative approach is key to enhancing the global competitiveness of the Tees Valley. We look forward to working alongside our fellow river users to further develop this platform and, in turn, drive socioeconomic betterment for the Tees Valley." 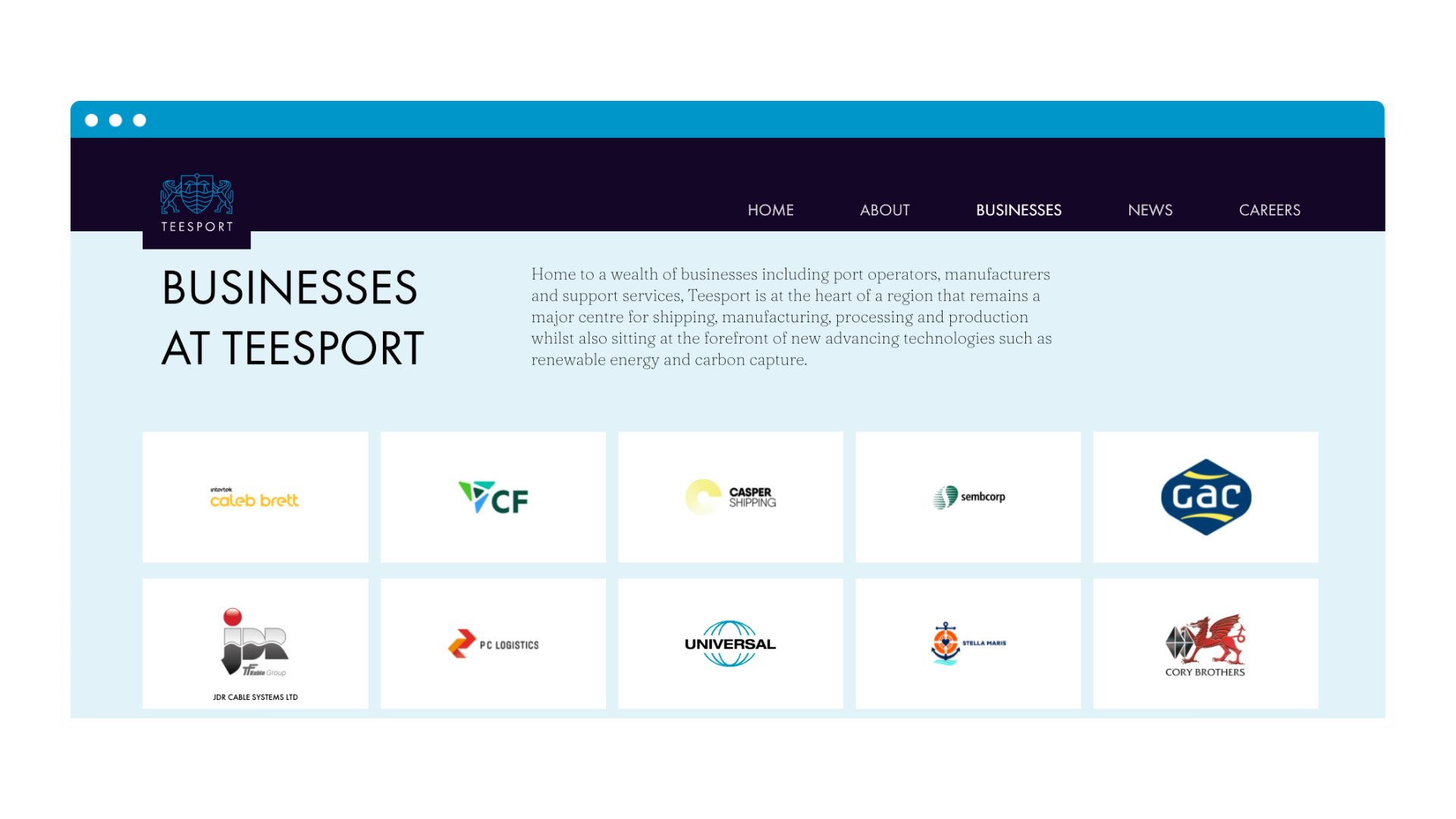 In addition to business listings and an interactive map, a dedicated news section collates Teesport specific stories as well as updates from individual businesses to promote key activity from across the river. Alongside sharing news directly from organisations, this section of the website can also host press releases, investment announcements and development plans that are relevant to audience groups and potential investors.

Similarly, a careers page helps advertise vacancies at all levels and services. From work experience and apprenticeships to managers and senior leadership roles, this provides a one stop shop for people looking to find opportunities as well as businesses looking to fill their vacancies.

Our MD, Mark Easby, said: “We’re proud to continue our brand partnership with PD Ports which has now stretched for over eight years. The new digital platform showcases Teesport as a national asset for trade, with infrastructure and facilities that set the benchmark for other UK ports to follow.

“From a regional point of view, continuing to highlight the Tees Valley’s opportunities is something that’s very close to our heart.

"And by bringing businesses together from across Teesport, as well as key educational partners such as High Tide, we’re continuing our commitment to building a better place to live, learn and work.”

The new identity and digital platform helps cement Teesport as the lifeblood of the Tees Valley and a major national hub for industry, commerce and business activity. With a refined identity and an immersive digital platform to match their unparalleled connectivity and world-class infrastructure, Teesport is well placed to strengthen its position as the northern gateway for international trade.

Find out more by visiting the Teesport website and keep up to date by following Teesport on Twitter.

Alongside our most long-term brand partner, we’re proud to launch a new publication celebrating the River Tees and our wider region.