With a track record of effective place branding, we know what it takes to create a successful destination identity for developments spanning the property, commercial and industrial sectors.

Whether it’s Ashmere, Middlesbrough Council or Teesworks, we understand the importance and potential that these projects hold. In many cases they’re not just opportunities to redevelop or repurpose land, they’re a chance to shape regions, empower communities and ultimately change lives. With that comes a need to consider a diverse network of stakeholders – Atom Valley was no different – yet in more ways than one it was a development like no other.

Overseen by Rochdale Development Agency (RDA), on behalf of Bury Council and Rochdale Borough Council, the North East Growth Corridor (NEGC) was a collective term for large-scale development sites with significant potential in Greater Manchester. As an opportunity to level-up in both a regional and national sense, the area’s aim is to become the UK’s go-to area for advanced manufacturing and machinery, which in turn will help power wider regeneration and regional prosperity for Rochdale, Bury and surrounding areas. 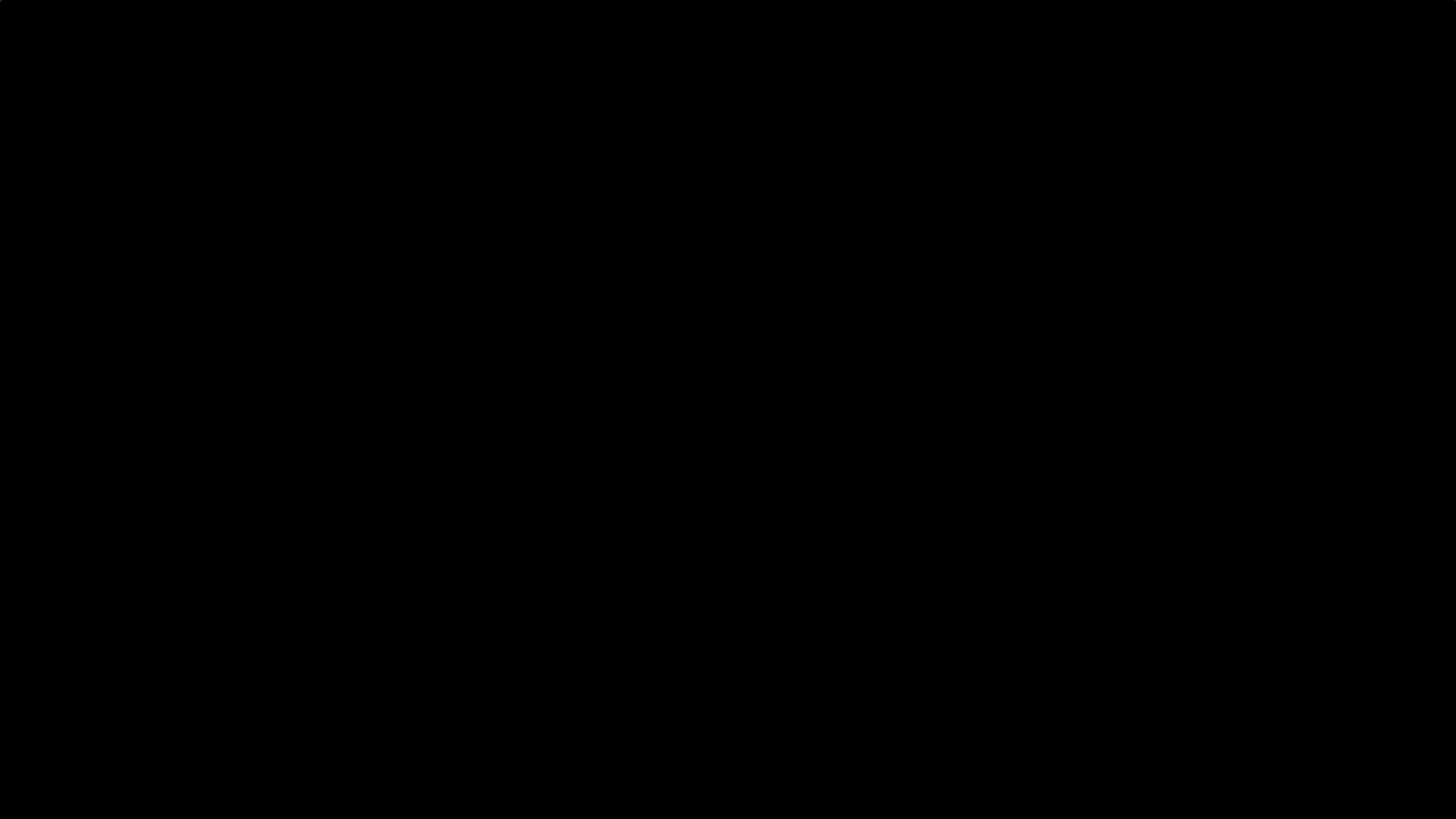 As well as housing and infrastructure promises, the mayoral development zone’s immediate focus is to attract inward investment from both the public and private sector. But having previously been referred to by a number of loose terms, the project was at risk of falling at the first hurdle. In order to fulfil its potential as a vast mega-cluster of innovation, a clear name and unifying concept was needed to capture the attention of international investors, government bodies and the general public alike.

A place that does things differently

The main challenge was creating an identity and proposition for a development that was still very much in its infancy, with no physical progress and a future that was yet to be fully defined. Even the geographical location wasn’t tied to one particular site or piece of land. As a result, we searched for a golden thread that could run throughout the area and unite its past, present and future – a meaningful and relevant story that would resonate locally but also translate globally.

The answer lay in Manchester’s pioneering attitude and spirit of innovation. This is the place that was the birthplace of corporation. An area that split atoms, spun fly shuttles, revolutionised chemistry, built the first modern computer and isolated graphene. It’s a region that was at the forefront of the first industrial revolution – now it’ll be the catalyst for the next. The theme developed from our initial leadership workshop, and was further shaped through desk research and one-to-one stakeholder interviews. This set the scene for the naming stage.

Come together as one

With 2.23 million square metres of employment space and the potential for 35,500 new jobs, it was clear that the name needed to express scale and opportunity. From the outset, it was also obvious that this was anything but another business park or industrial estate. This is the place that will provide a £3billion boost to the economy and help create industrial revolution 2.0. – commercialsing world-class research and bringing industry and education closer together to shape a future that’s greener, fairer and more prosperous. 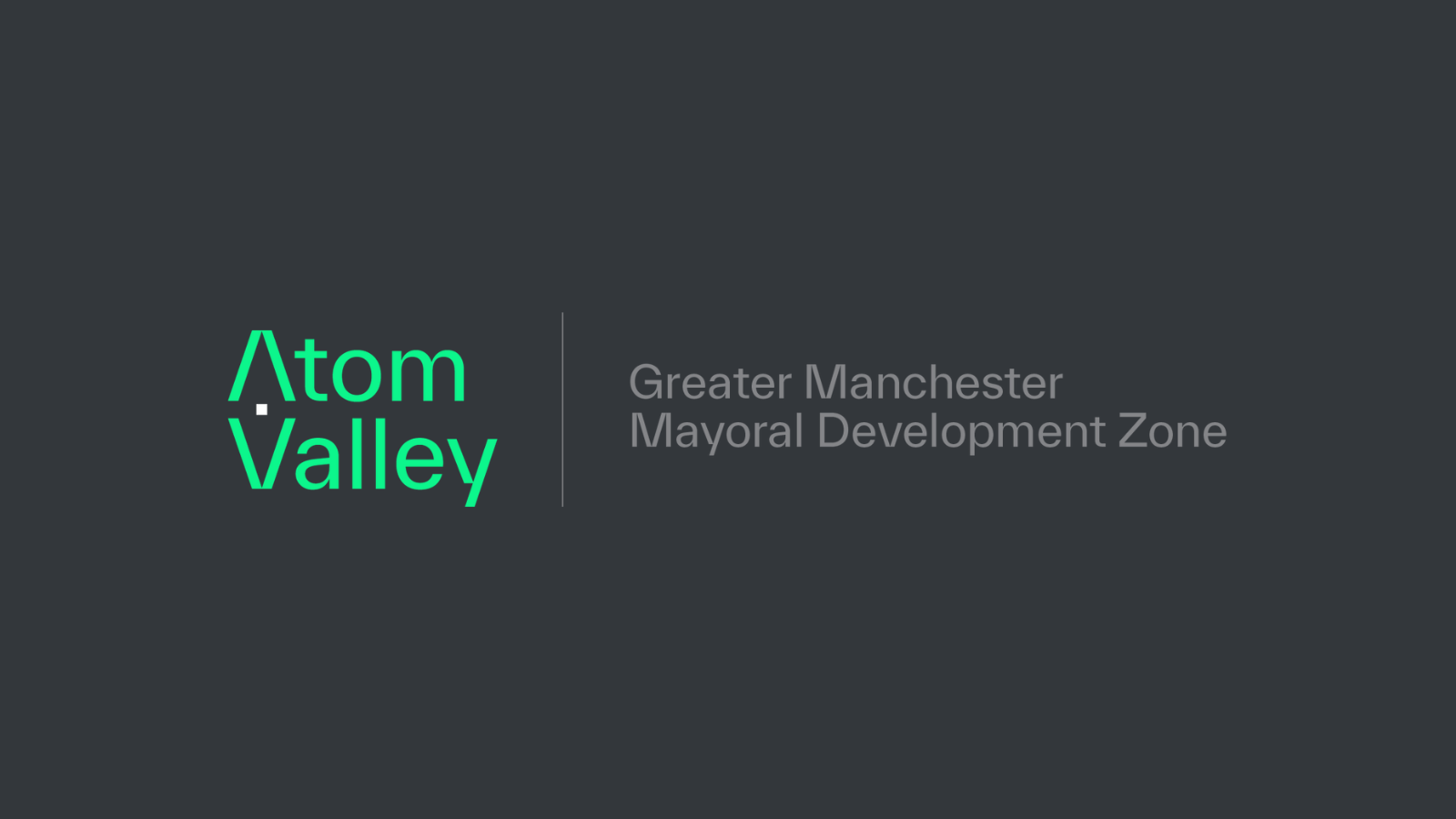 After exploring a series of naming strategies and conventions, a shortlist was drawn up for the key decision makers at the RDA to review and decide upon. Atom Valley was the chosen route, reflecting Greater Manchester’s relationship with the atom and its metaphorical meaning. Much of this is testament to The University of Manchester, where in 1917 Ernest Rutherford created an artificial nuclear reaction – or ‘splitting the atom’ as it later became known. Fast forward just shy of 90 years, and the university was once again leading the way in nuclear physics. This time it was Professor Andre Geim and Professor Kostya Novoselov turn to achieve a stunning scientific feat, extracting graphene to create the world’s lightest yet strongest material – graphene. Today, the material is of particular prominence for the area, with both established research institutions and businesses continuing to play an active role in its development.

This link to graphene serves as a useful metaphor, with its strong, dynamic and limitless potential paving the way for a better tomorrow. In a physical sense, the name has a much wider meaning and resonance; atoms come together to form molecules that create an identifiable unit – the perfect comparison for the communities, both commercial and residential, that are set to live and interconnect in Atom Valley. 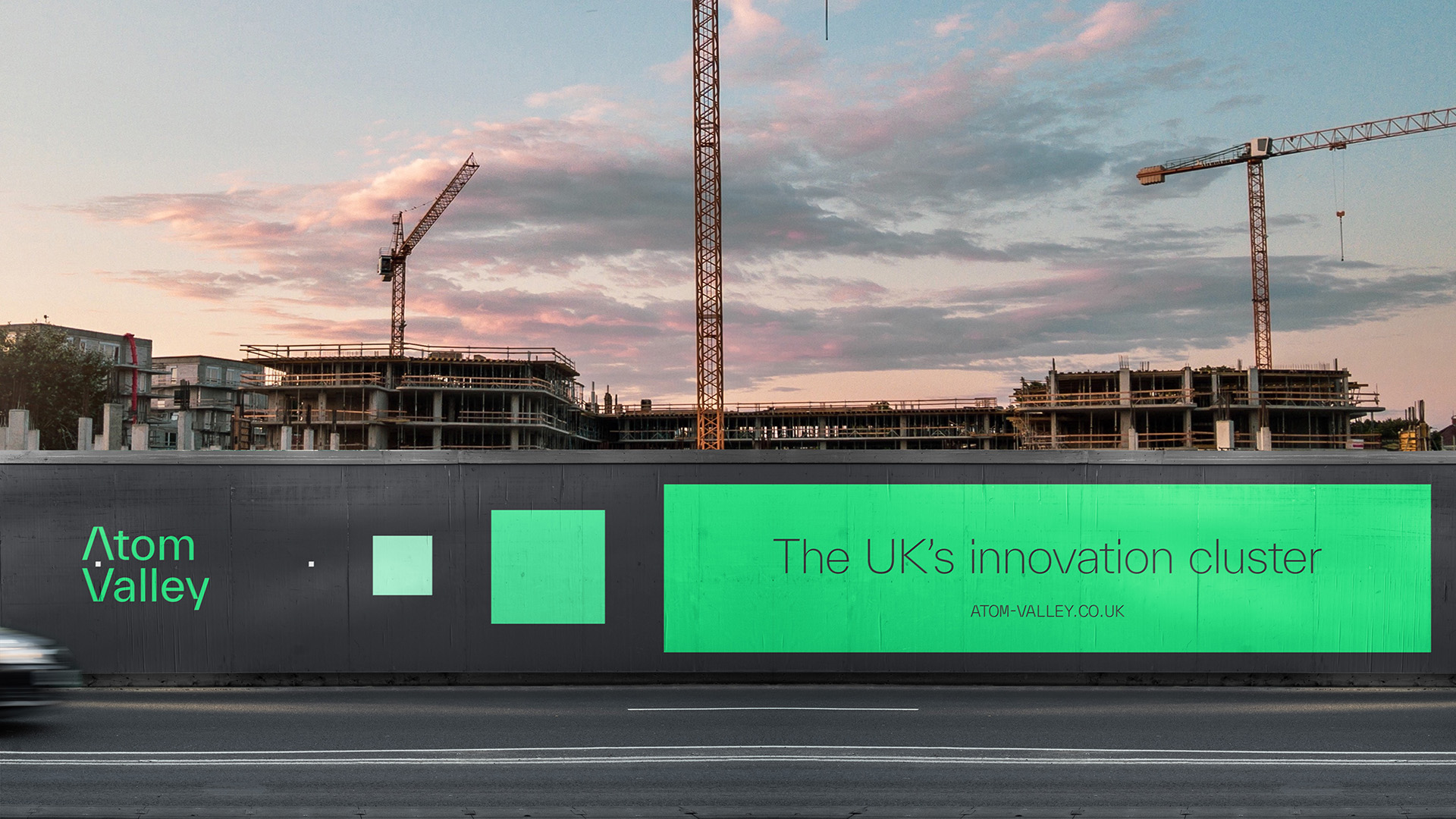 Looking beyond the NEGC, the name helps the project feel part of a wider Greater Manchester family: Trafford Park, Media City, Airport City… Atom Valley. The ‘valley’ element adds an all important sense of geographical scale – if the other projects are cities, this is something far bigger. It also reflects its more rural nature and the experience of approaching the sites from the M62 and West Yorkshire.

Visually, the identity is built around two ideas: precision engineering and Manchester’s association with the atom. The former is a crucial part of the area’s current commercial activity, while the latter relates to the city’s previously mentioned long-standing spirit of innovation.

Forming a natural symmetry, the A and V are played off each other in a precisely aligned lock-up. The metaphorical atom is isolated between them as a single point of focus. A vibrant green is coupled with a deeper grey to supercharge the brand. This is a colour palette that’s a visual ode to Atom Valley’s green roots and sustainable aims, but amped up to an almost punchy, computerised green that symbolises technology and progress.

With naming and a visual direction agreed, we replayed this back to a wider focus group of stakeholders from across local authorities, educational providers and the private sector. These one-to-one interviews gave a chance for the group to offer immediate feedback and reactions to both the blueprint of the proposition as well as naming and identity. Further minor refinements were then made before the final seal of approval from the working leadership team.

With a multitude of locations and a diverse range of stakeholders, we’ve developed a brand that can discover its own future for each and every audience.

"First class is often an overused term, but Better’s work is deserving of that description. They’ve created a brand that will play a crucial role in delivering this once in a lifetime opportunity for Rochdale, Bury and Greater Manchester.

“It’s also unified our diverse range of stakeholders and received the seal of approval from Andy Burnham, Mayor of Greater Manchester; Paul Ormerod, Chair of the RDA; Neil Eccles, Head of Innovation at the RDA; and John Blundell, Portfolio Holder of the Economy at Rochdale Bury Council.” 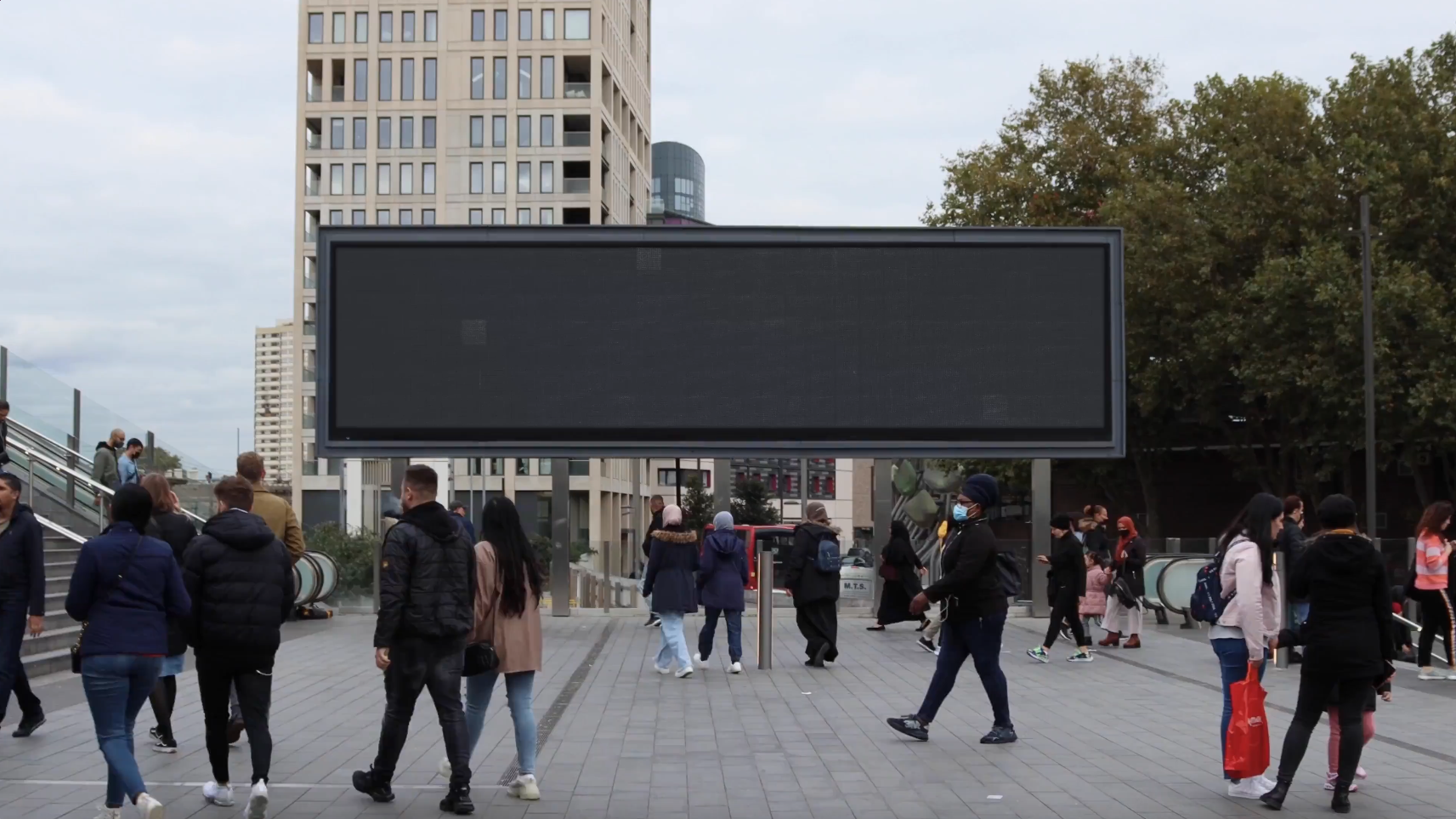 Verbally, the brand illustrates a rich heritage and direct lineage, connecting it to a relevant, relatable and powerful proposition that amplifies this unique opportunity to change the face of the region. Visually, we feel the identity is fresh, energised and positive – sitting on the right side of corporate without being too minimal or dropping into the realms of public bodies. Its inherently precise and structured aesthetic reflects its advanced manufacturing activity, which is complemented by a futuristic sense of innovation, digital and science.

Together, this gives Atom Valley a platform to create more than just history. It gives them a brand and proposition to create a better tomorrow. A place where ideas are accelerated and theory becomes reality. A 15-minute community where people can live, learn and work. A destination that’s local and global all at once.

Find out more with the Atom Valley case study.

Alongside our most long-term brand partner, we’re proud to launch a new publication celebrating the River Tees and our wider region.

As it continues its rebirth and transformation, we’re proud to launch the new website for Teesside International Airport.